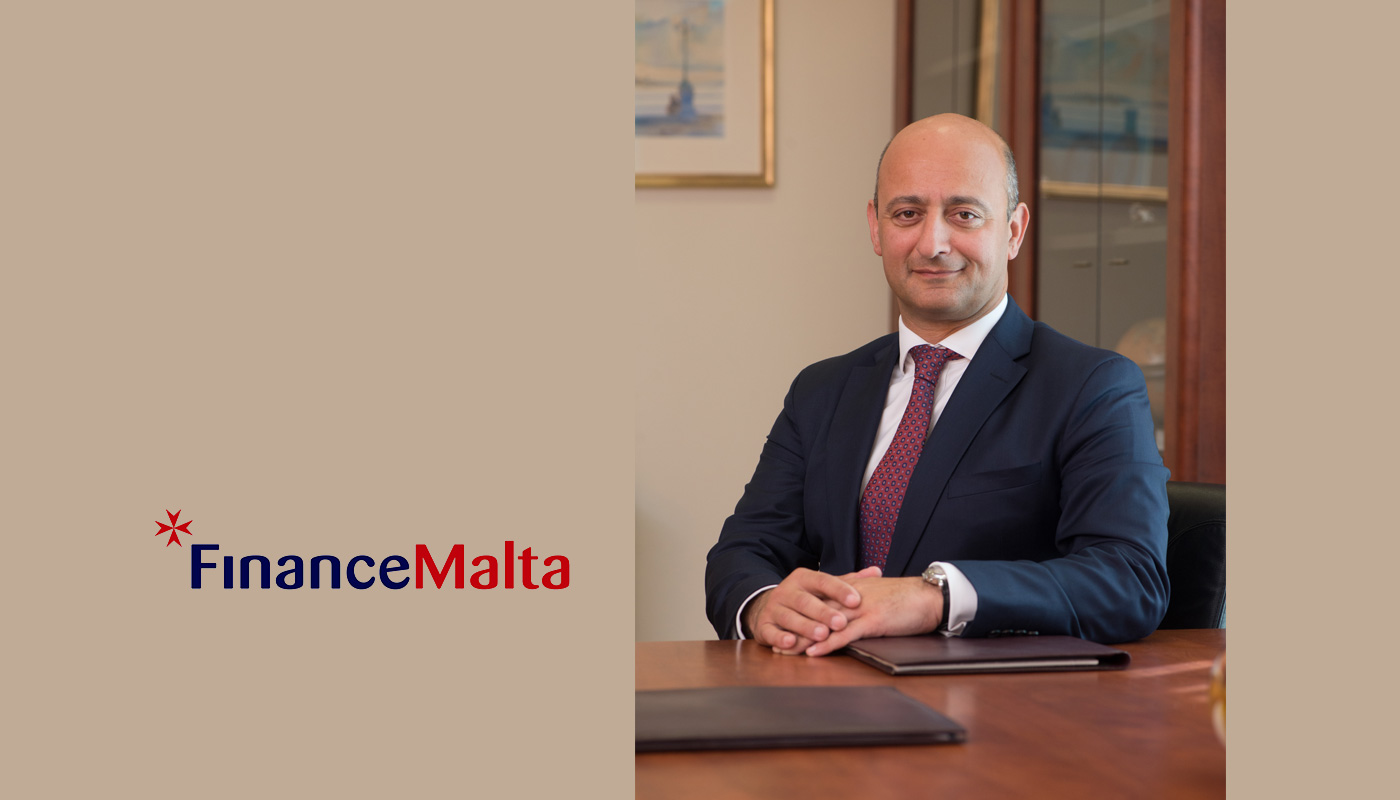 WF: 2018 has been yet another remarkable year for Malta, having surpassed all GDP growth estimates, achieving Europe’s highest year-on-year growth, at 6.6%. Malta is set to lead European growth for the next 2 years, thanks to a diversified economy backed by strong consumer demand, a healthy financial sector, exports, and an expanding labor force. What is your biggest priority today?

KF: Finance Malta was set up in 2007 to promote Malta as a financial center outside our shores. Our financial sector began in 1994, that's when we shifted from being an offshore jurisdiction to an onshore one. The government decided then that Malta should join the EU so we needed to change our legal and regulatory framework. The decision was made to do this in the late '80s and the overhaul was passed through parliament in November 1994. New legislation was enacted and this paved the way for the development of the domestic sector. It took ten years to join the EU. In 2003 we had a referendum and the people voted to join the EU. After we joined in 2004 we saw a need to set up a body to promote Malta as financial center. Malta was known for its weather, history and culture, but not as a financial center. At that time the manufacturing center was strong but that's no longer true. Today we have more high-end manufacturing and not as much low-end manufacturing such as textile or shoe manufacturing as we did in the past. We focused on developing a service center proposition. When we joined the EU we felt we had two good, developed structures: the financial services sector and the insurance sector. We were also developing support for family offices and family businesses. We were developing a regulatory framework for asset holding structures. We added fintech and banks and finally blockchain and virtual financial assets. There is a partnership – which is FinanceMalta – between the government and industry to promote these sectors internationally. We organize initiatives in key markets like Europe and in the EA and the US and the Gulf. We do events in Hong Kong, Singapore and China. We also participate in third party events like conferences. Here in Malta we organize a big annual financial services conference every year, attended by around 500 people. As a promotional body, we are strong in the digital space and social media and we have a dedicated website. We also have publications on individual sectors in five languages, and product and service-based fact sheets. We are a member-based organization, we have with around 350 members, and we facilitate networking through our events. The industry has grown from 3 percent of GDP in 1994 to around 12 percent now. The sectors are well-developed. The majority of operators here are foreign owned. We have around 63 insurance companies and around 160 investment services operators. You need substance, resources and physical presence to set up here and be granted a license. We have an attractive proposition for operators. Our costs and level of bureaucracy are competitive. Operators who want to penetrate the EU market need a European jurisdiction. Startups find Malta more affordable than Luxembourg or Ireland and Malta is business-friendly from a regulatory standpoint and just as important, the governance structures are in place. We are agile and accessible; you don't have to wait an excessive amount of time to get a license. We set the right standards and the regulators explain what is expected. The communication is good before licensing. The regulators ask about plans and the business so that both sides understand what is expected and how to move forward. People come to Malta because we have political and economic stability. We don't have political problems like what you see in the rest of Europe. You rarely see strikes here.

WF: What are Malta’s competitive advantages?

KF: We see good economic growth, we registered 6.2 6 percent last year and last quarter around 5 percent. Regulators are supported by a comprehensive legal and regulatory framework. The laws are very comprehensive. In the ten years it took us to join the EU the regulators ensured that all our regulations were in line with the EU. We rank first in transposing EU directives into national law because we are so agile and we want to enable companies to use those laws. The service infrastructure is strong, the Big Four top four audit firms are here, as well as the medium tier. The Big Four firms top tier employ up to 500 people each. We have a good suite of law firms, most are family owned, but they are well-connected with their counterparts abroad. In the banking sector I think we need more banks because of the size of our economy, which is around €12 billion. Particularly banks specializing in sectors such as aviation finance, shipping finance, the niche sectors. Most of the companies here are seeking services from outside of Malta. Normally islands like Malta depend on one or two economic sectors, for example, Guernsey or Bermuda. But Malta is very diverse. Tourism represents about 22 percent, financial services about 12 percent, Gaming around 11 percent, and then we have aviation, maritime, ICT, English language tutoring and manufacturing. We are also attracting medical cannabis companies to set up in Malta too. We are diverse and that brings stability. We also have law firms who have positioned themselves to serve multiple sectors. Another benefit we have is cost competitiveness. Set up costs and ongoing costs and recruitment are all competitive. We have fiscal benefits for companies and for employees who come here. Foreigners in the C-suite range of salaries are defined as highly qualified persons and there are regulations for certain skill sets where if you come here your maximum tax rate is 15 percent. Under our fiscal regime you are charged 35 percent in corporate tax and when the company distributes profits to shareholders through dividends the shareholders get 6/7ths of the tax back. We have double tax treaties with Spain, the US and with most European countries and with countries in the Gulf, so companies don't incur double taxation.

WF: You want to raise financial services to 16 percent of GDP in the next five years. What are you plans to achieve this goal while also helping the industry crack down on financial crime?

KF: Yes, that is our goal. There much focus on financial crime and regulators are honing in on financial services operators to make sure they are compliant and have controls in place. I don't think this is a country-specific problem, we've seen issues in many countries. This is a global problem. Our parliament drafted a law and sent it to the national authorities and each transposed it in the way that seemed best to them. We don't have global banks in Malta. The banks in Malta are all predominantly domestic banks. When you want to send money overseas you have to send it through your correspondent bank in Europe, so the money makes multiple stops. All transactions in Malta go through global correspondent banks. The focus is to use regulatory technology and AI and collaboration between authorities in different jurisdictions. But that still needs to be improved to make sure that the respective controls are robust. It's not easy. Crime today is sophisticated and criminals set up legitimate businesses to process illegitimate money. But technology enables you to look at patterns and make connections between different companies with the same beneficiaries. Only technology can support that. We are doing our part in Malta. We have the Financial Intelligence Analysis Action Unit investing in technology. The regulators are upping their game as well. Digitizing things will make monitoring easier for banks. There is a push to eradicate check payments and cash as much as possible. Digital currency will help as well.

WF: Do you think digital currency is the future?.

KF: Yes. Banks should embrace this. I think technology will allow digital assets to be used by banks, it's in the interest of the banks. The cost of cash management is huge. Think about the cashiers in every branch, the cash lying idle in banks, the security vans, insurance, cash centers, and even the cost to business. Think about the big supermarkets who have to handle the cash and organize security vans. Some supermarkets have entered into the business of cashing checks because it's easier for them to get rid of the money. I think digital currency will happen in the next 5-7 years, a framework has to be built.

WF: Spain can be used as a bridge to the Americas. What is your final message to readers in Spain and the Americas?

KF: Yes, Spain is a good conduit. Malta has come a long way from humble beginnings to become a jurisdiction where you can set up any kind of financial services business. Operators can successfully set up and operate here. We are very strong in the fintech space. We are the first country in the world to create a legal and regulatory framework have regulations for blockchain and virtual financial assets. The regulatory and legal enablers are in place. Malta is unique in that it is the closest EU state to the African continent. It has always enjoyed strong relationships with the North African markets. There are significant opportunities in Morocco and Algeria. We are fostering close relationships with Ghana and Ethiopia. There is an opportunity to do partnerships and joint ventures with operators in Africa which are keen to explore the European market, and Malta is a good gateway to Europe. Malta is known in the Middle East and Africa and is not a threat, we are a small jurisdiction, so we are more accepted.